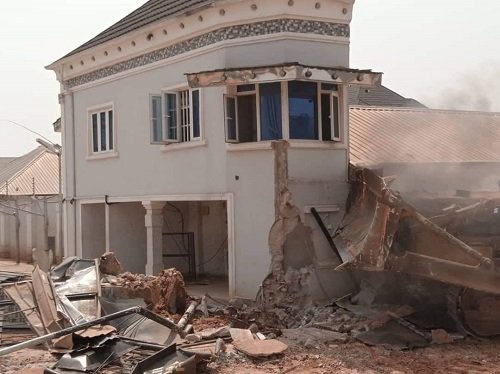 The power tussle between the Edo State Governor Godwin Obaseki and the National Chairman of All Progressive Congress (APC) Mr Adams Oshiomhole has taken a new dimension as the state government ordered the demolition of a multi-million naira hotel belonging to Tony Kabaka Adun, the right-hand man of Oshiomhole.

How it was demolished

Bulldozers and security personnel were mobilised to the hotel at about 12 noon and began the demolition.

It was part of the state government’s commitment to removal of illegal structures erected on government property, including public schools and waterways as well as roof eave-extensions and structures erected on the right of way of roads/streets, moats, river banks, TCN high tension lines, among others in Benin City and other major settlements in the state.

Residents in the area trooped out to watched the demolition of the hotel.

The Edo State Government had in October last year, through the Ministry of Physical Planning and Urban Development, issued a seven-day notice to Tony Adun to remove his T. Latifah Hotel and Suites, located at the Ugbor axis of the State capital.

It said the hotel was built on a property belonging to Ugbor Primary School.

Kabaka, who had vowed to die if the hotel was demolished, later opted to beg Governor Godwin Obaseki.

He apologised to Governor Obaseki for the words he used in the previous video saying he was “angered.”

Tony was engaged by Comrade Adams Oshiomhole administration to collect taxes from drivers.

He and other private revenue contractors were sacked by Governor Godwin Obaseki, who insisted the state government has the ability to collect its revenue.

Speaking on why the hotel must be demolished, Governor Godwin Obaseki said that no amount of blackmail would stop him from demolishing the building because it was built on government property.

Governor Obaseki told reporters last year that there was no political undertone in the decision since he had warned in the past that his administration would not tolerate lawlessness.

According to him: “Businesses cannot thrive when there is anarchy and complete disrespect for the law. For us as a government whatever we need to do to ensure that there is law and order will be done.

“If any law has been breached in Edo State, I have sworn to the constitution to preserve order. This is a government that is not afraid of anybody and will not be subject to blackmail. Anybody who contravenes the law no matter how highly placed you are in Edo State, you will be dealt with.

“It has no political undertone. If you go to Etete now. I am doing the same thing. I am fencing the sports centre.

“I have warned in the past that anybody who encroached on government land or school properties will be dealt with. Go to Bénin Technical College, that is evidence. As long as they continue to behave lawlessly, we will enforce the law.”

Reacting to the demolition, Kabaka who spoke on the phone, said it was saddened that the state government could not wait for judgment to be delivered in the case.

Kabaka said the court had fixed Friday, February 7, 2020 for judgment in the suit.

He said he had secured injunctions stopping demolition of the hotel.

His words: “We are still in court. I have injunctions against the government. Judgment is on Friday. I have Certificate of Occupancy in my house but I don’t have C of O in the hotel.

“Let him go ahead and demolish it. 100 years is not forever.”

Special Adviser to Governor Obaseki on Media and Communication Strategy, Mr. Crusoe Osagie, said all injunctions have been vacated at the court.

Oshiomhole has not reacted to the demolition at the time of this report.