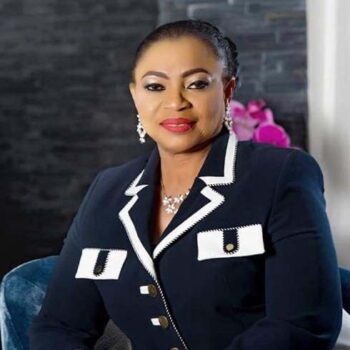 Whenever a list of richest Africans is mentioned, one woman who finds herself in the male-dominated league of the billionaire is Folorunsho Alakija.

Oil, fashion, and printing all contributed to the legendary businesswoman’s riches. Hers is not a tale of sudden triumph, but rather one of perseverance and tenacity.

She became a billionaire as a result of her entrepreneurial acumen and a string of lucrative ventures. She is a well-off woman who loves the latest vehicles and other luxuries in life, as well as the social standing that comes with it.

Folorunsho Alakija is the second richest African lady and the third richest African woman in the world. Alakija, is a Nigerian business entrepreneur, with interests in the fashion, oil, and printing sectors. She is the Rose of Sharon Group’s Group Managing Director as well as Famfa Oil Limited’s Executive Vice-Chair.

Alakija was born in Ikorodu, Lagos, in 1951 to the family of Chief L. A. Ogbara. She attended Dinorben School for Girls in Wales for her elementary education. While she was in Ogun State, Nigeria, she also attended the Muslim High School Sagamu.

Pitman’s Central College in London was where Alakija obtained her secretarial training. She has also studied fashion design at the American College and the Central School of Fashion, London, where she earned a degree in fashion design.

While at Sijuade Enterprises at Lagos in 1974, Folorunsho was promoted to executive secretary. At First National Bank of Chicago (Fin) she also worked for a few years.

With her own tailoring firm, Supreme Stitches, Alakija took the plunge into entrepreneurship for the first time.

Her tenacity paid off, as her firm found its place in just a few short years of operations. After Alakija renamed it to the Rose of Sharon House of Fashion and it fully commenced operation. She is the President and trustee of the Nigerian Fashion Designers Association (FADAN).

For decades, she served as president and a lifelong trustee of the Nigerian Fashion Designers Association (FADAN).

Famfa Limited, owned by Alakija’s firm, was given an oil prospecting permit (OPL). The cooperation with Star Deep Water Petroleum Limited was the result of Alakija’s desire to broaden her horizons.

The Federal Government of Nigeria appointed her to the position of Vice Chairman of the National Heritage Council and Endowment for the Arts.

It is her belief that one should give back to society what one receives that birthed The Rose of Sharon Foundation to provide orphans and widows with long-term prospects.

Folorunsho has been married to Modupe Alakija for decades and they are blessed with four sons and grandchildren.

Some of her businesses are:

A family-owned oil and gas company that was once known as OPL 216. It was founded in September 1991 and is one of the top indigenous Nigerian-owned crude oil exporters in the country.

Rose of Sharon Prints and Promotions

A printing company specializing in monogramming. The firm prints on pre-made garments such as shirts, towels, bedsheets, uniforms, and tablecloths.

She also serves as Vice Chairman of another real estate company.

Alakija as a Prophetess:

Alakija attributes all of her accomplishments to God. She is an evangelical Christian with a passionate Christian calling. Since 1991, when she gave her life to Christ, she has preached the gospel relentlessly to anybody who would listen, even in the marketplace.

On January 14, 2022, in a video she posted on her Instagram page, the billionaire woman was seen preaching the gospel on the street of Lagos with other followers of the gospel.

As part of the missionary, she co-founded a church with her husband called Rose of Sharon Glorious Ministry International.

In 2014, she made a significant financial contribution toward the completion of a 350-seat lecture theatre at Ibrahim Babangida University in Lapai, Niger State. Additionally, the building was named after her in recognition of her kind act.

Additionally, Folorunsho Alakija is passionate about education. Her charitable activities include the provision of scholarships to several Nigerian students. Her organization is a significant supporter of the reputable Agbami Medical and Engineering Scholarship Scheme.

She also founded The Rose of Sharon Foundation, which assists widows and orphans via the provision of business grants and scholarships. She has also endowed the Yaba College of Technology with a skills acquisition center.

Through her charity, the Rose of Sharon Foundation, Folorunsho Alakija gives back to society.

Despite her affluence, Folorunsho Alakija does not brag about her automobiles on social media. Indeed, she lacks the flare for ostentatious automobiles that many celebrities possess.

For her business meetings and short journeys, the rich entrepreneur prefers traditional, modest transportation. She also looks to be a Mercedes Benz enthusiast, following are the cars in her garage which include:

As a busy entrepreneur who frequently shuttles around the world to expand her business, she owns a 46 million dollars Bombardier Global Express XRS.

She has written many books, they include:

Additionally, she is the matron of Africa’s Young Entrepreneurs.

In 2021, Forbes reported that Folorunsho Alakija’s net worth dropped below $1 billion due to the fall in the price of oil. By the end of 2021, she bounced back to $1.9 billion.